It all began just two days ago, when I discovered a less-than-inspiring post on Donald Miller’s blog, directed at girls who want to live a good love story: 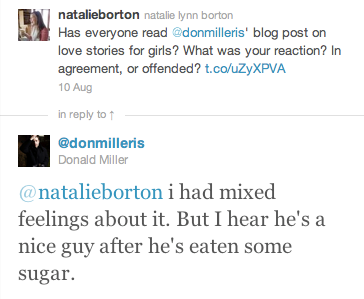 I was shocked, amazed and pathetically-too-excited that Donald Miller mentioned me in a tweet…I mean, he’s Donald Miller…author of Blue Like Jazz, Through Painted Deserts, A Million Miles in a Thousand Years, and so many other brilliant pieces of work. My little voice had been heard! Shortly after, I published my response to his controversial post, mentioning him once again in my tweet: 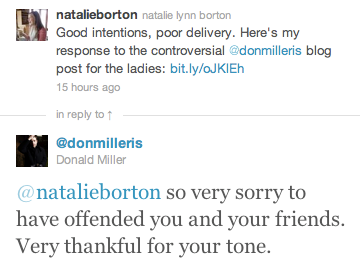 Offensive and frustrating as it was to read his original post, I’m thankful to say that it is no longer published on his blog. In fact, shortly after I posted my thoughts I noticed that he had not only removed the distasteful material, but had also issued a public apology about it to the many who had expressed their feedback to him. Amazing, beautiful, and notable. 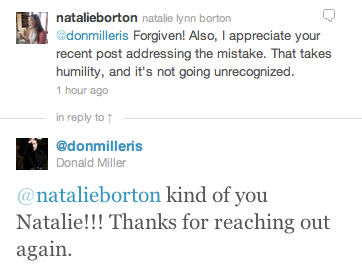 It’s always exciting to see change and progress happening before our eyes. We see something wrong, we stand up for it, and boom, the wrong is corrected. It’s a wonderful thing, change. Thank you, Donald Miller, for hearing the many voices who responded to your post, and for being humble enough to own up to your mistake. It’s a rare quality, and something to be honored and recognized.

Have you ever owned up to making a major mistake? How did others respond?

More of my current favorites here >>